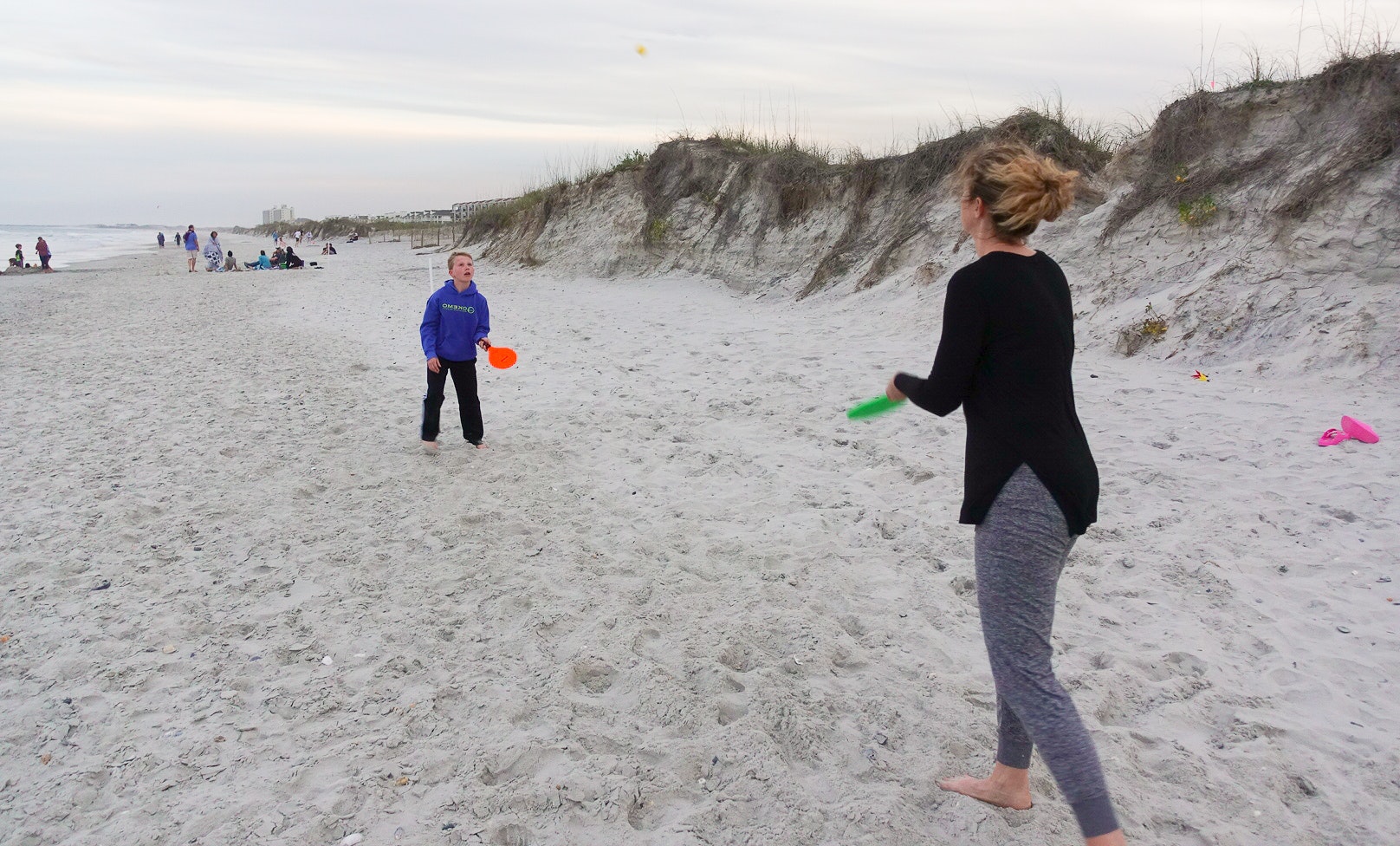 Our Favorite Games To Play On The Beach

We have gathered up some of our favorite games to play while at the beach.  These are also great to set out for outdoor parties or to get for summer entertainment for the kids.

Most of these are great for a wide range of ages and abilities.  We love heading back out to the beach with the kids after dinner to get all of the wiggles out before bed. 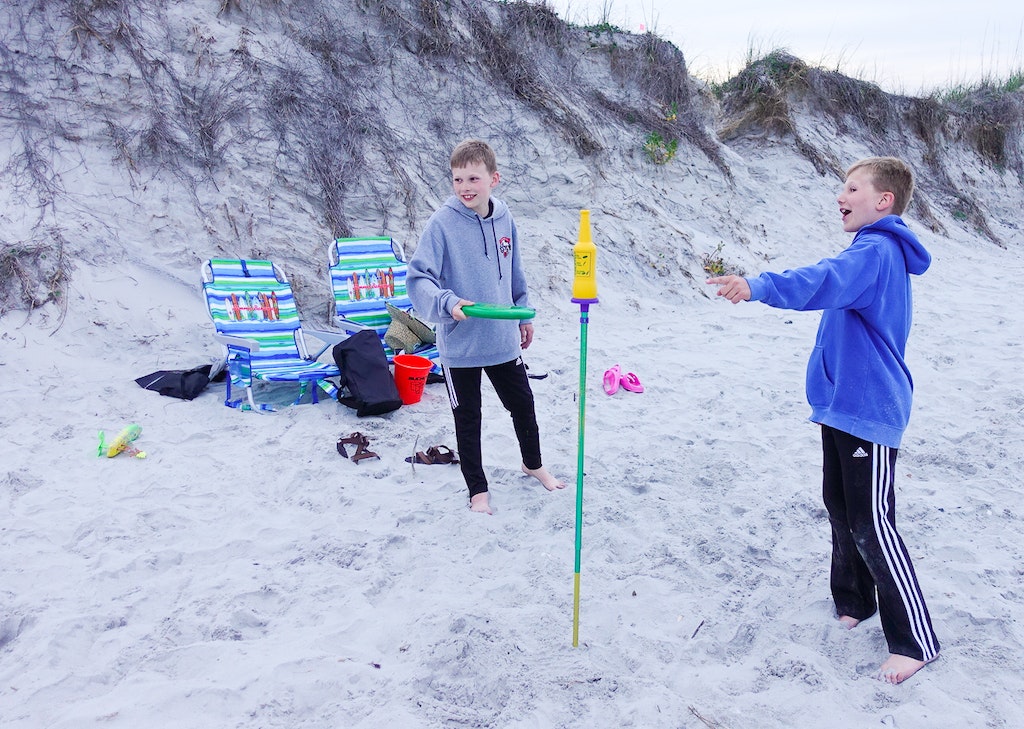 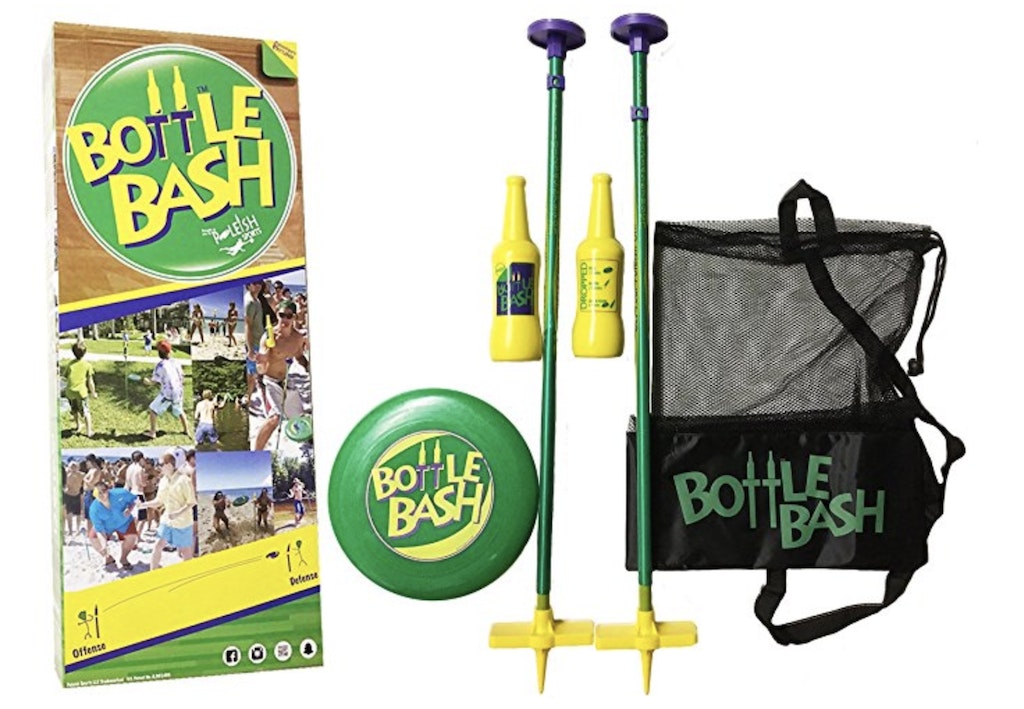 Bottle Bash was one of our kids favorite.  You try to knock the pole with the frisbee to get the bottle to fall off.  We moved the poles closer and lower for the younger kids … and mom 😉 . This one is extremely lightweight and portable. 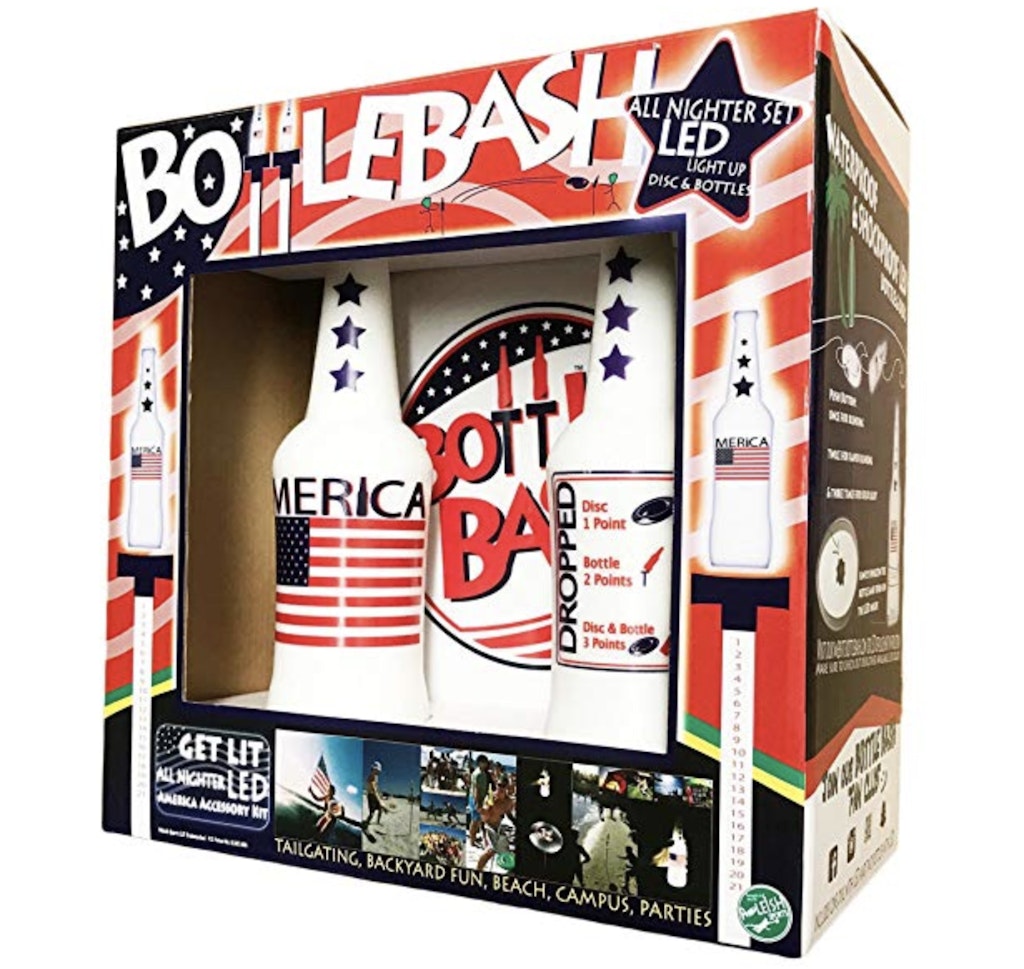 There is also a glow version of bottle bash . LED Bottle Bash would be really fun at night with older kids or adults. 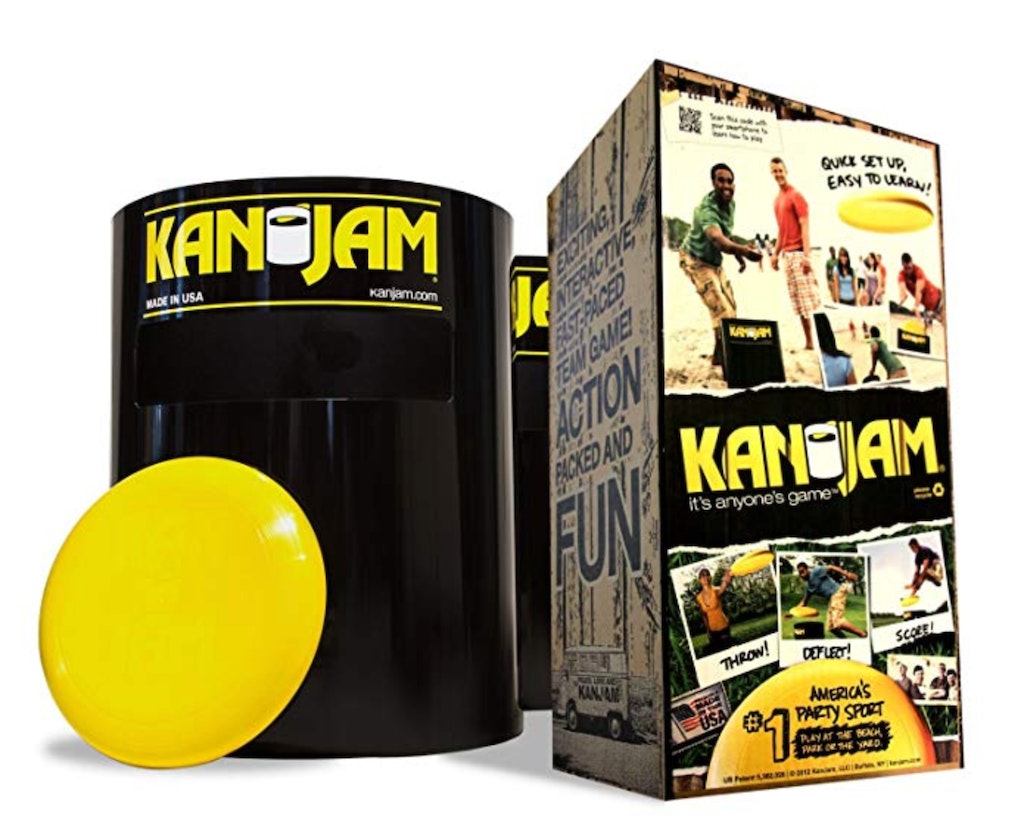 Kan Jam is played similarly to bottle bash.  Two teams try to hit their opponent’s kan 😉 with the frisbee while the other team can try to deflect it.  You score points for deflecting, hit the can and instant win if you get the frisbee in the little slot on the can.

It is a little more bulky to carry down to the beach than bottle bash and weighs a little over 7 lbs.  Would be fun for a backyard BBQ or if you are just headed out to the beach to play that and aren’t carrying everything else for the day. 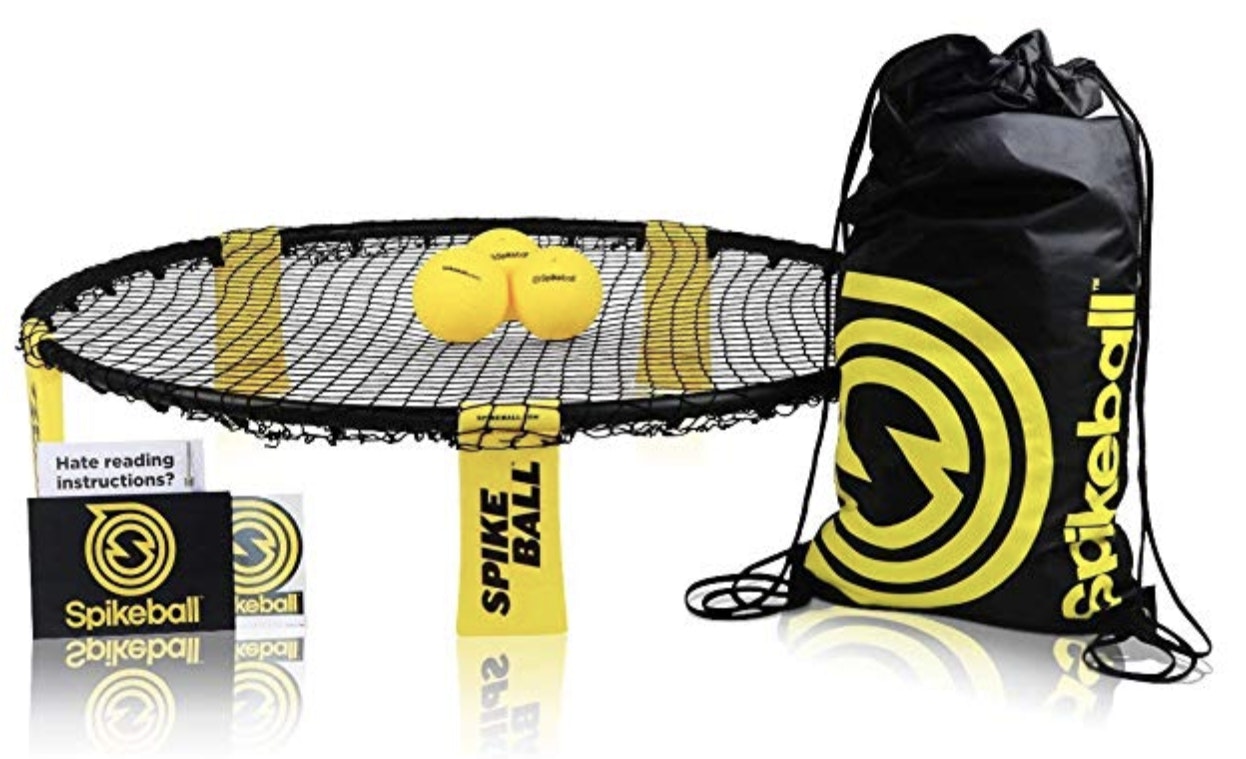 We always see people playing  SpikeBall or Slammo when we’re down on the beach.  It’s a four person game, 2 teams of 2, where you spike the ball down onto the net and the other team has three chances to then spike the ball back down to the net.

It’s really lightweight and portable and you can adjust the level of play and really the rules based on the ages of the kids playing. 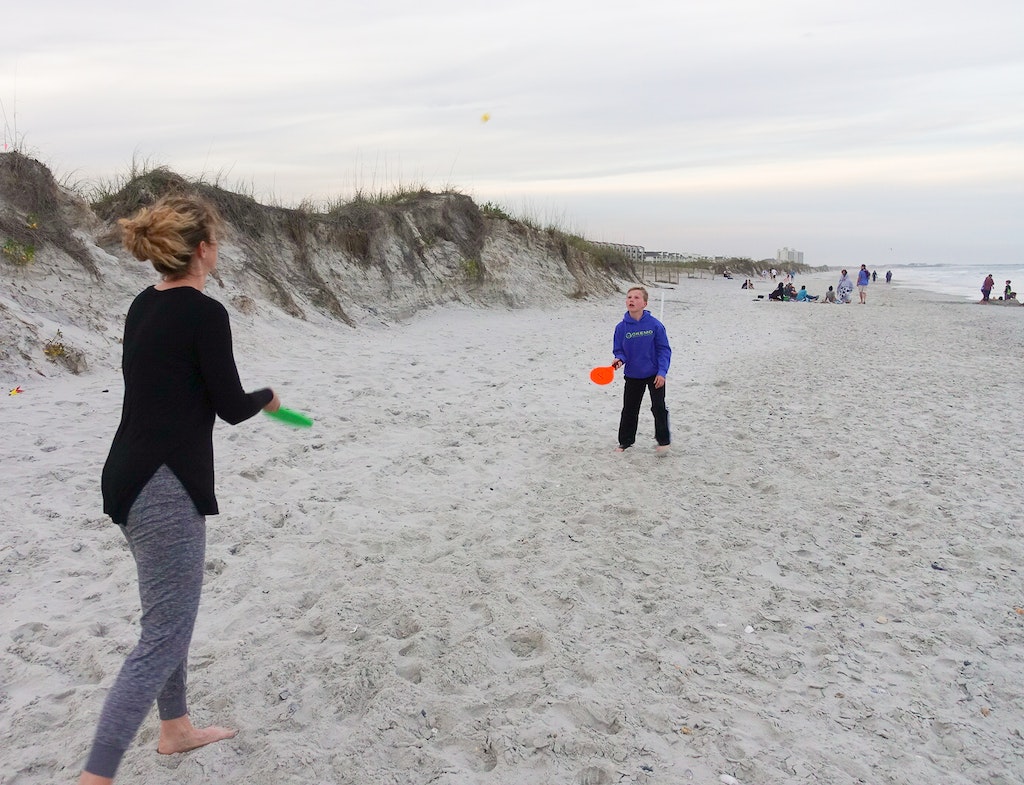 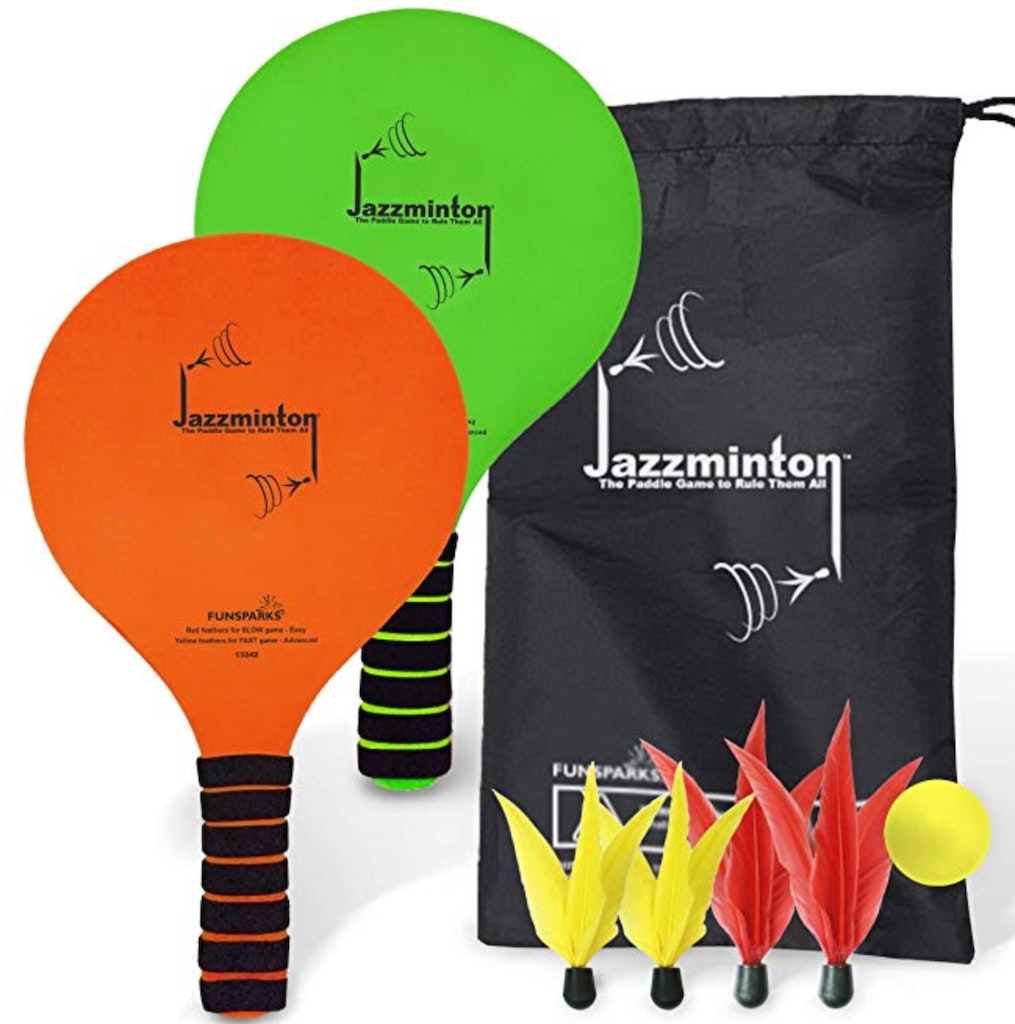 These paddle ball sets are always fun to bring down to the beach.  The first one, Funsparks Jazzminton comes with a few different birdies and a ball.

The birdies don’t work well on a windy day, but we then just switched to the ball that is also included in this set. 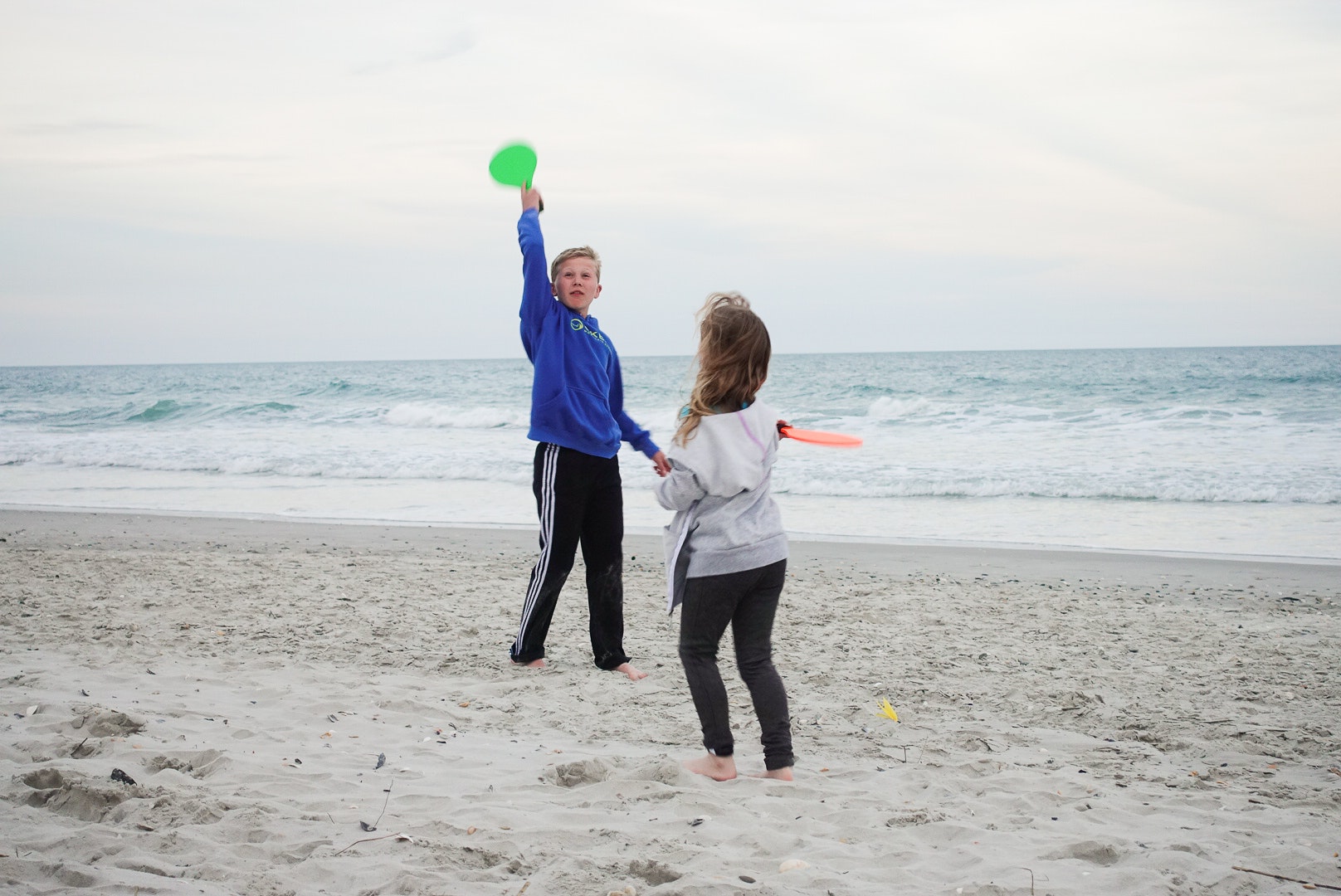 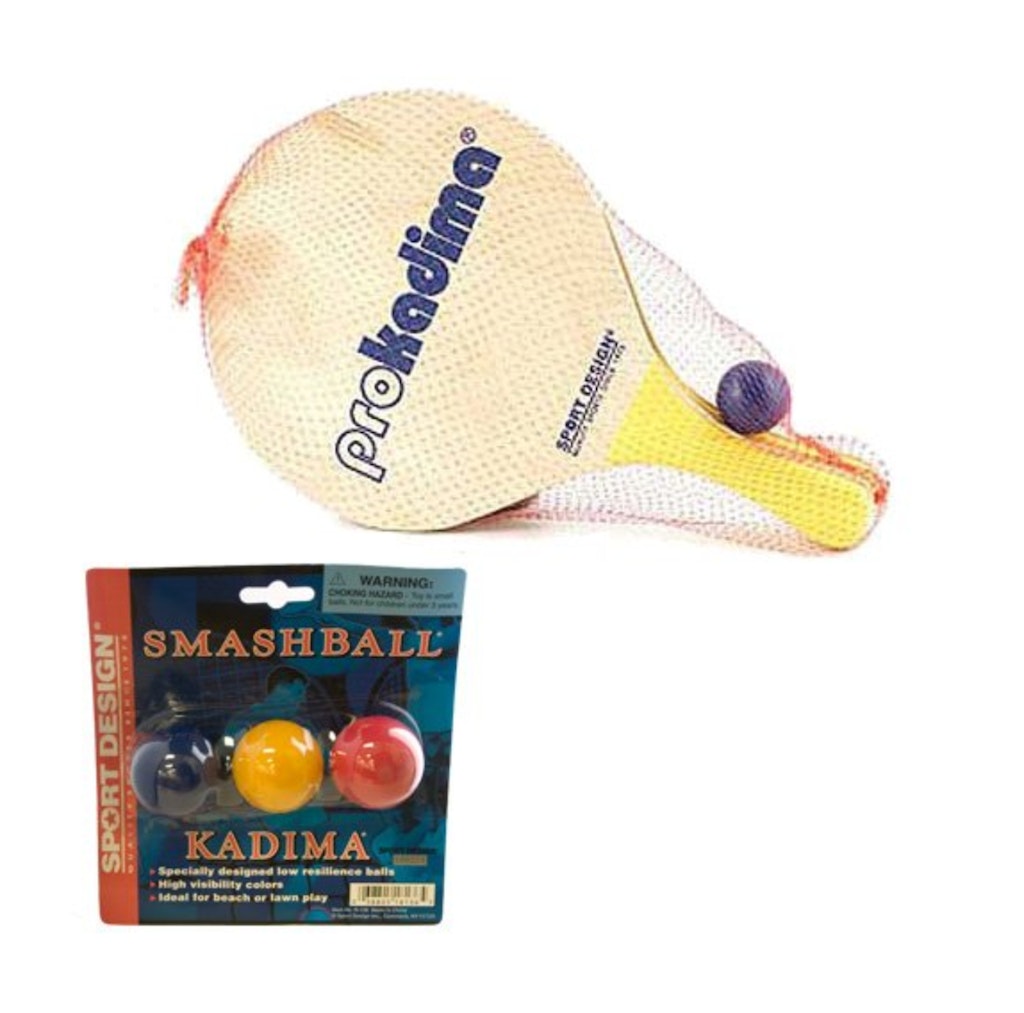 The Kadima Paddle Ball set includes two wooden paddles and a few balls.  This set has held up for a few years and the extra paddle balls are great if you loose one in the sand 🙂 No carrying case is included, but you can snag a drawstring bag from the dollar store if you want to keep the set together. 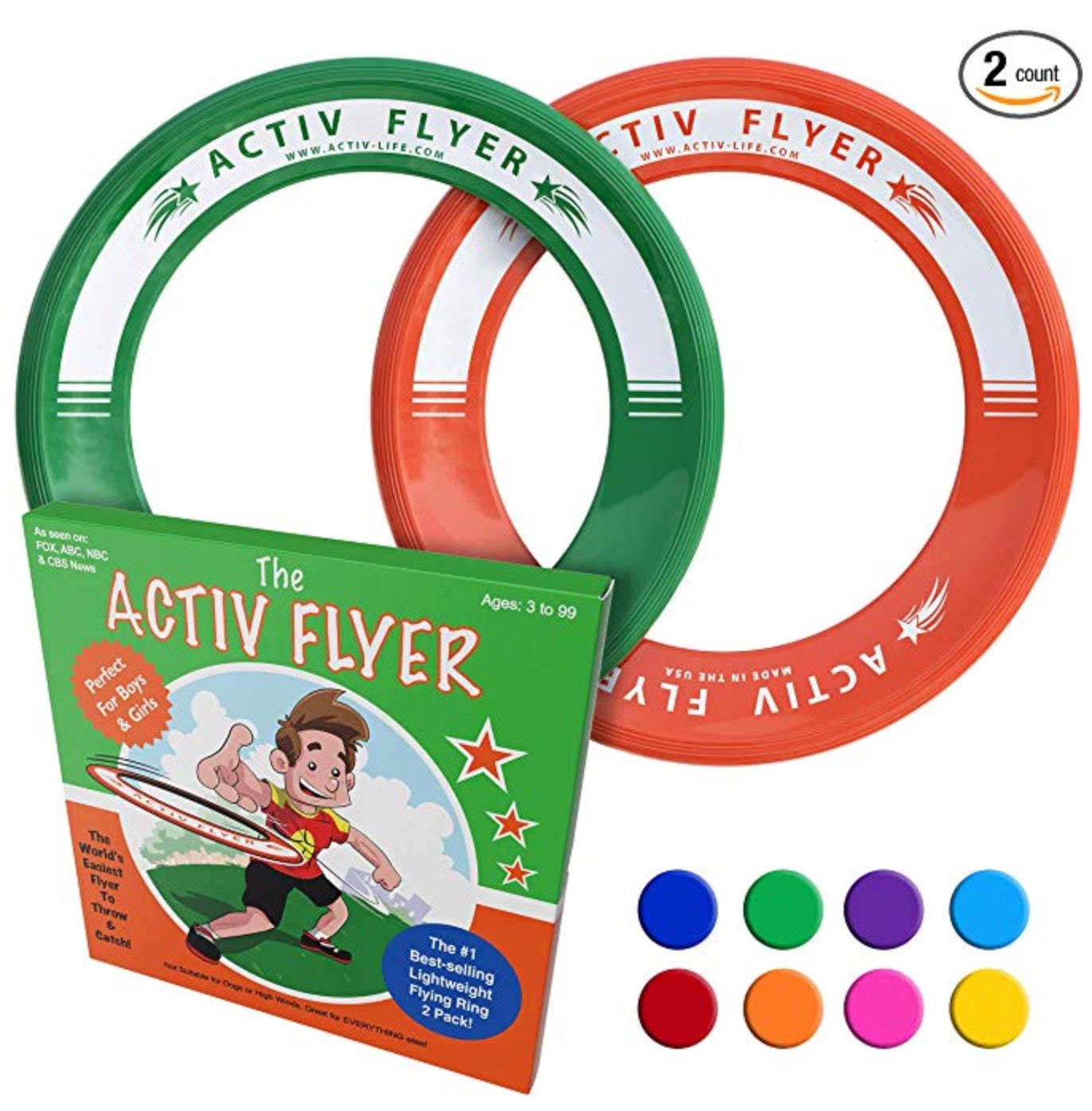 Our kids love these Activ Flyer frisbees. They are lightweight and a little easier to catch than a traditional frisbee. 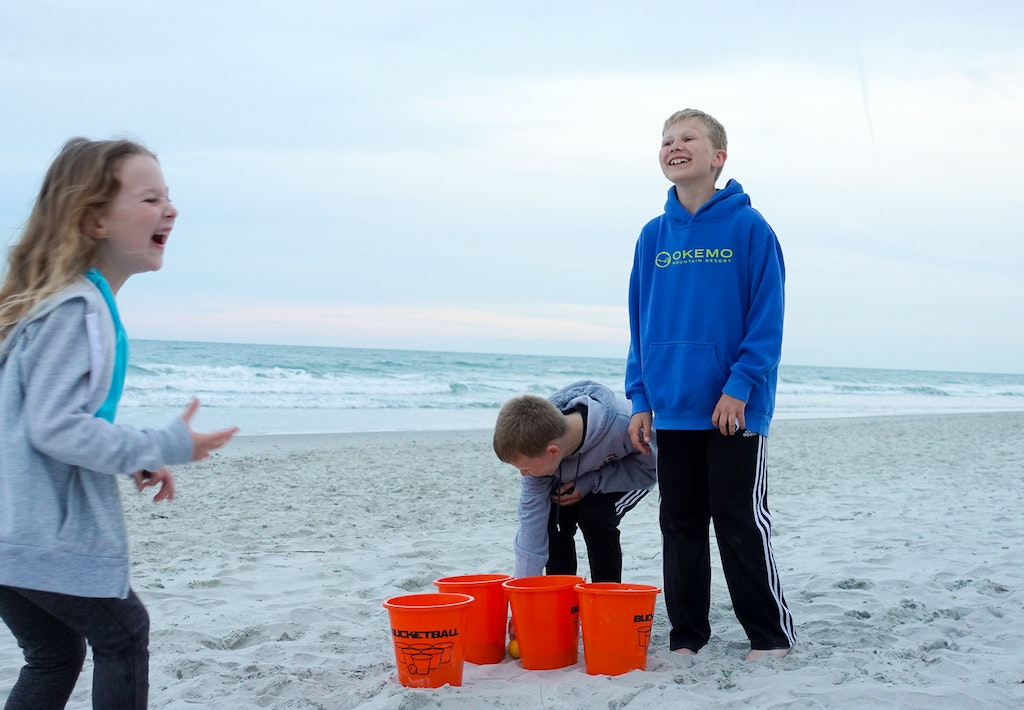 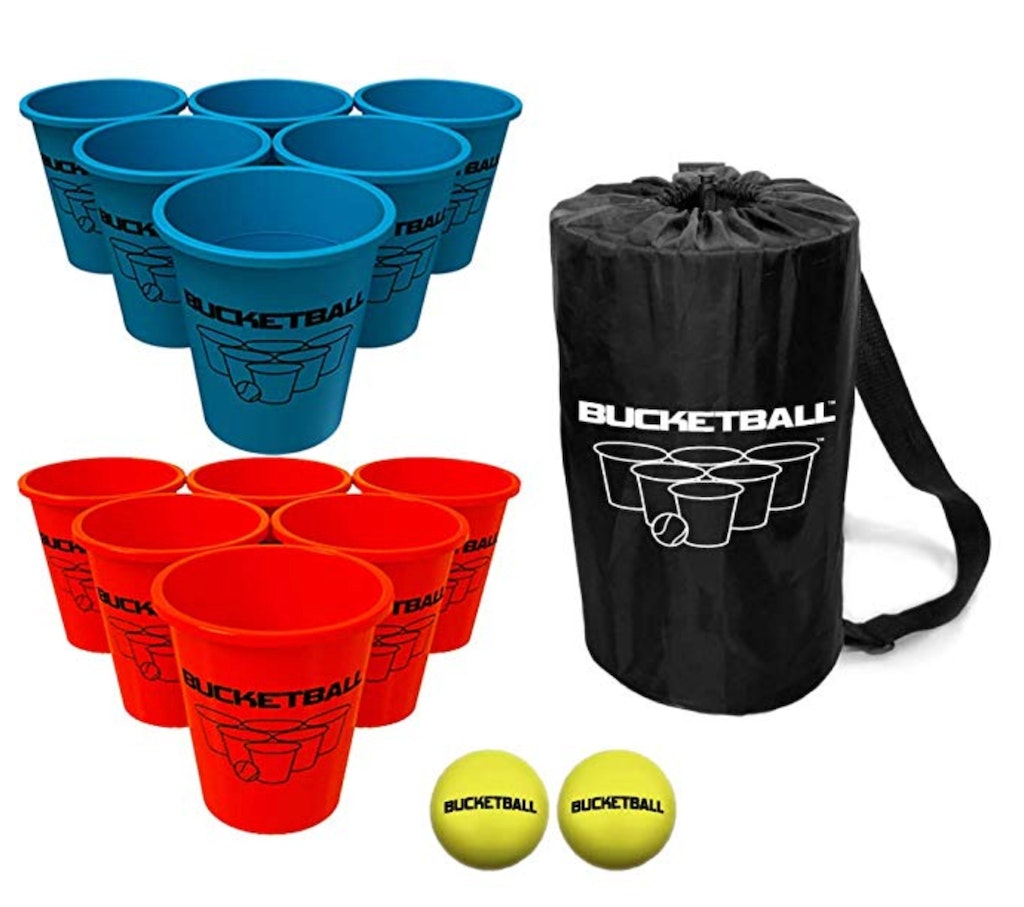 We really enjoyed playing Bucket Ball, but it’s a little pricey and bulky to lug down to the beach with the rest of your gear.  The concept is similar to beer pong 😉 You toss the balls toward the other set of buckets.  If you make it in one of the buckets that bucket is removed from the set.

The first team to have all of the buckets removed wins.  It comes with 12 full size buckets and two balls.  I would also recommend purchasing extra balls to toss since it would speed the game up especially with younger kids or adults with bad aim like me.  Having only two tries before switching to the other team’s turn really made it a long game.

I love the concept but in my opinion you can recreate this game with supplies from the dollar store for a lot cheaper.  You could snag 6 or 12 buckets and some kush balls or hacky sacks and create your own version of bucket ball for a lot less.  We actually made a DIY Dollar Store version of this game this summer.  Check out the details here. 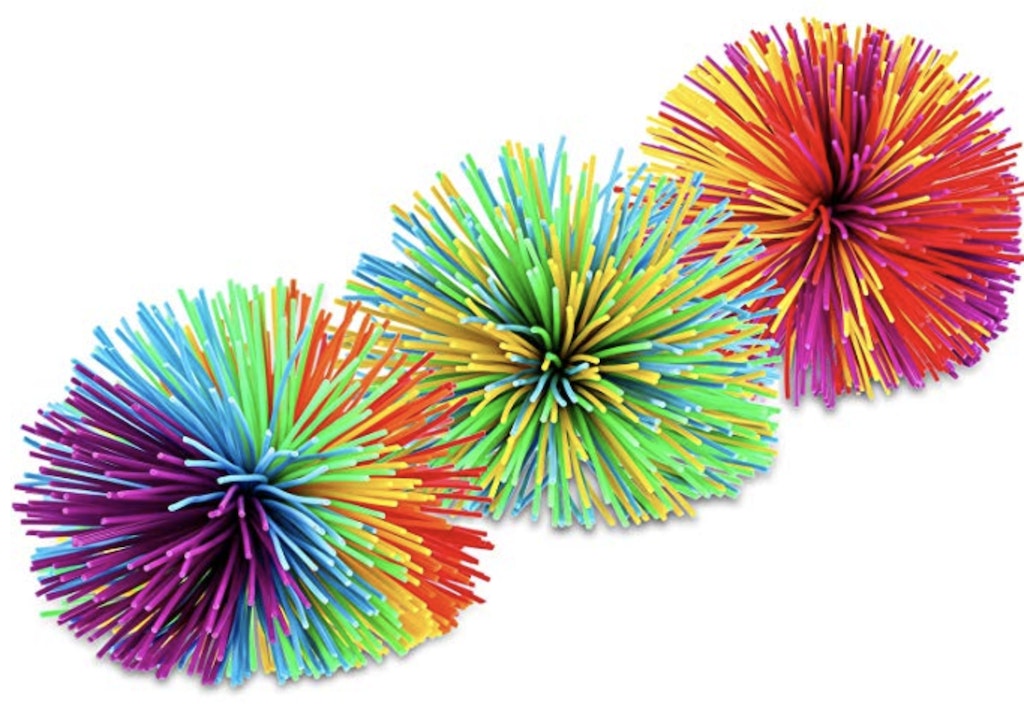